Building an Impact Economy: The Role of Philanthropy 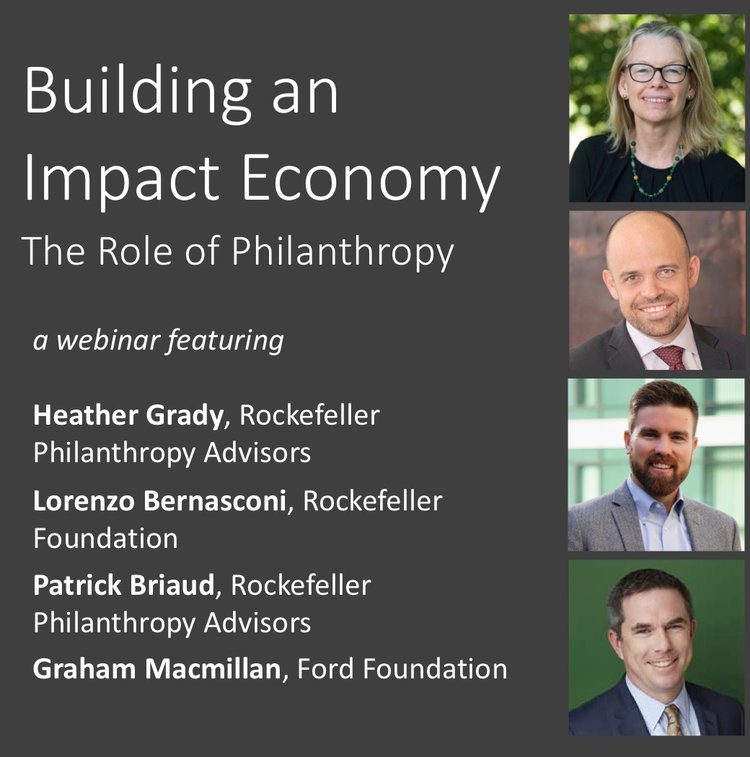 In July 2018, Rockefeller Philanthropy Advisors and Impact Entrepreneur Center brought together four dozen individuals from three continents for a summit in Massachusetts. Leaders in systems thinking, philanthropy, impact investing and ‘new economy’ models, these individuals share an interest in creating economic, financial and investment systems that serve people and planet, not the other way around. The organizers created the short-hand term ‘impact economy’ to represent this objective.

To date, efforts to create an impact economy have been piecemeal. Many organizations today are helping to solve seemingly intractable problems and demonstrating the possibility of moving beyond incremental change to real transformation. But their success rests on their ability to shift the complex systems in which those problems exist – and that is influenced by many factors, not least how they are funded, that add up to a meaningful transition to a new status quo. To that end, philanthropy and impact investing could do more to build this impact economy and create sustained support for social transformation from the bottom up. Currently too few funders support the infrastructure required to scale the growth of alternatives to the mainstream.

Following two days of discussions at the convening mentioned above, a call to action was proposed towards philanthropic organizations – first to use their capital in a way that more directly supports the development of an impact economy; and, second, to align their investments and actions overall with the underlying values inherent in an impact economy. The result was a roadmap to guide philanthropy’s role towards an impact economy.

In this live webinar and Q&A, the Summit co-conveners will summarize the key points of this call to action and discuss with a panel of senior philanthropic professionals the role of philanthropy in building an impact economy.

Heather Grady is a Vice President in the San Francisco office of Rockefeller Philanthropy Advisors and leads the organization’s strategy and program development in global philanthropy, including collaboratives and research. Heather advises clients from the US and other countries on strategy and a variety of thematic areas. She also leads the Scaling Solutions initiative, which encourages funders to collaborate to place longer-term, adaptive resources to accelerate scalable solutions and impact that target systemic changes, and she helped to create the SDG Philanthropy Platform to engage philanthropy in the Sustainable Development Goals. Heather also serves as an Adjunct Professor at the China Global Philanthropy Institute.

Heather’s approach has been shaped in part by two decades of living in Asia, Africa, and the Middle East, managing long-term development and humanitarian programs for Oxfam Great Britain and Save the Children that focused on a range of sectors including education, livelihoods, gender equality, health, agriculture and microfinance. Following her time outside the US she served as the Managing Director of Realizing Rights: The Ethical Globalization Initiative, founded by former Irish President Mary Robinson, and was an Adjunct Professor at Columbia University. In 2010 she joined the Rockefeller Foundation as Vice President for Foundation Initiatives where she oversaw an annual grantmaking budget averaging $65 million. She managed initiatives spanning several themes including health, agriculture, employment, climate change, transportation policy, and impact investing.

Heather has degrees from the Kennedy School at Harvard and Smith College. She is conversant in Chinese. She has co-authored books, most recently a book on social innovation published in China, and writes regularly on philanthropy and social investing. She serves on a number of Boards and Advisory Groups including the Business and Human Rights Resource Centre, the Wildlife Justice Commission, The B Team, and the sustainable fashion company Piece&Co. She is a member of NationSwell, and has served on the World Economic Forum’s Global Future Council on International Governance, Public-Private Cooperation and Sustainable Development.

Lorenzo Bernasconi is a Senior Associate Director at The Rockefeller Foundation. He leads the Foundation’s “Zero Gap” portfolio focused on incubating and investing in new financial products and mechanisms with the potential to mobilize large scale private investment towards the Sustainable Development Goals (SDGs). Prior to joining The Rockefeller Foundation, he worked at Dalberg Global Development Advisors, the Boston Consulting Group and in the investment banking division of UBS.

Dr. Bernasconi holds dual Ecuadorian and Swiss citizenship. He received a bachelor’s degree in economics at the London School of Economics, completed a PhD at Cambridge University and a post-doctoral fellowship at Columbia University’s Earth Institute. He sits on the board of Spring Bank, a Bronx-based community bank focused on the underbanked communities of New York City and on the board and investment committee of the Independent Social Research Foundation, headquartered in Amsterdam.

Prior to Rockefeller Philanthropy Advisors, Patrick was head trader and investment analyst of Lee Financial’s $900M portfolio. As a professional tennis player, he earned a world doubles ranking of 125 and played in Wimbledon 2008. Patrick has a B.S. in Industrial Engineering and Operations Research from the University of California, Berkeley and an MBA from Yale’s School of Management.

Graham Macmillan serves as Senior Program Officer for Impact Investing at the Ford Foundation. In this role, he is responsible for developing the team’s grant-making strategy and coordinating it closely with our program-related investment.

Prior to joining Ford, Graham was Director of Corporate Citizenship Partnerships at Citigroup. As director, Graham worked with Citi’s myriad businesses to drive economic and social impact with clients and other key stakeholders while contributing to Citi’s broader citizenship reporting requirements.